EARLY YEARS
Born in Baxter Springs, Kansas in 1905, Waylande de Santis Gregory knew what he wanted to be since the age of four. Playing on the riverbanks at his family’s farm making mud pies of little animals, he was disappointed to see them disintegrate in the rain. He soon learned in school through firing, they could become permanent. From the Native Americans in the nearby village, he learned they could become art. Under their tutelage, he began learning how to craft rustic pottery pieces.

Gregory’s parents, William Thomas and Louise de Blumer Gregory, owned a hardware business and raised polo ponies. His mother, a former concert pianist, fed his imagination with stories she read him from Greek mythology. This would have significant influence on his future work.

THE KID GREGORY PERIOD
Now called “Kid Gregory” due to his prodigious talent, at the young age of 20 Gregory was directing the decoration and design of the Missouri Theater, the Hotel President in Kansas City and the bas relief panels at Brandenburg field at Pittsburgh State University. For the Hotel President project, Gregory adapted several historical styles using Renaissance motifs in one room and colonial designs in another. His most ambitious and widely publicized effort was his Aztec Room, the hotel’s dining room (seen in the final scene of the Paul Newman movie Mr. And Mrs. Bridge).

The resulting press attracted the attention of Lorado Taft, a well-known sculptor who was academically trained at the Ecole de Beaux Arts in Paris. Taft became his mentor and together they visited Europe many time, studying classical Renaissance sculpture, as well as visiting prominent European artists in Paris, Rome and Florence. Gregory;s European adventures led him to another great discovery: the great beauty Yolande von Wagner who met in Paris and who would eventually become his wife, muse and champion.

In 1929, Gregory joined Cowan Art Pottery in Rocky River, Ohio where he designed small ceramic figures that were produced in limited numbers. He also became their most prolific and successful designer. It was at Cowan that he mastered the art of small ceramics.

THE CRANBROOK PERIOD
In 1931, Gregory became an “artist-in-residence” at Cranbrook Academy of Art, now known as the “ American Bauhaus.” Gregory was among some of the great artistic minds of the day including Frank Lloyd Wright, Florence Knoll, Ray and Charles Eames and the Saarines. It was under his guidance that Cranbrook began the development of a serious ceramic program. It was also during his time there that his work began to receive considerable attention.

FAME AND FORTUNE
Gregory left Cranbrook and headed east. He was named Director of the New Jersey WPA and began work on the Monumental Light Dispelling Darkness fountain, which still stands in Roosevelt Park in Edison New Jersey - the town where Thomas Edison made many of his famous discoveries. Light Dispelling Darkness, completed in 1937, exhibits a heroic theme of combating evil through knowledge, which is an appropriate theme given the town’s history.

His work at this time was much publicized and when a photo of Gregory’s sculpture, Kansas Madonna, appeared in Fortune magazine, it caught the attention of movie star Henry Fonda. This unglazed, terra cotta sculpture of a mare and her nursing colt intrigued Fonda, leading him to purchase of one of Gregory’s spirited “terra cottas.” Gregory and Fonda began a close friendship and working relationship (the artist was commissioned to sculpt a portrait bust of Fonda). In the years following, he would do the same for Albert Einstein, Charles Lindbergh and a host of other prominent figures. His work began to attract the attention of collectors, celebrities and famed decorator Elsie de Wolfe.

Gregory’s career as a ceramic sculptor reached its zenith about the time of his major commission for the 1939 World’s Fair, where he produced The Fountain of the Atom. It was comprised of the four elements: earth, air, fire and water, surrounded by eight electrons, 4 male and 4 female. Einstein in particular was pleased with the subject matter because it was the first time that the atomic age had been explored in a monumental work of art.

He was commissioned to do an 80 foot sculptural relief for a municipal building in Washington, D.C., which upon completion in1941, was considered the largest ceramic sculpture in the world. Before Gregory, working on a monumental scale was impossible. During his time he also received a patent for his famous “Crystal Glaze” method which allows the fusion of glass to clay, a technique still used today.

In the early 40’s Gregory began to successfully produce groups of refined and highly stylized decorative wares in limited edition numbers. These works were sold in exclusive stores such as Tiffany’s, Sloane’s, Asprey’s London, Hammacher Schlemmer, Georg Jensen, Neiman Marcus and Gump’s. His body of work in this category was immense, exploring a vast range of themes and styles yet definitively creating a distinct and instantly recognizable aesthetic.

LIFE AT HOME
Gregory and his Hungarian countess wife moved to New York city, and finally to a mountain-top house in New Jersey’s Watchung mountains. Designed by Gregory, the 17 room, 7,000 square foot house was built of concrete in a simple, vaguely Bauhaus style.. The establishment became something of a showplace, attracting friends, admirers, celebrities and leaders of the art world. White peacocks ambled over the grounds, which were heavily populated with examples of Gregory’s large sculptures. Their home exuded a sense of fantasy.

THE LATER YEARS
He briefly left the art world for a project with NASA to assist in developing the critical heat shields needed to reach the moon. He composed music, painted, began writing a newspaper column called Art & Living, appeared on the television show Creative Arts and also taught art classes at his studio in the 60’s.

Among the students was a socialite named Barbara Framer who lived in the former J. Seward Johnson mansion. Mrs. Farmer approached Gregory with a proposal that he become the director of an art centre that she and her husband would finance and build in the Berkshires. The centre would house his art and become a personal tribute to his work… his crowning glory. The venture ended in tragedy, culmination in the death of his patron at the hands of her husband. Gregory was publicly affected by this association and the resulting scandal. The art centre was never completed and he was never paid. He never fully recovered.

As he became older, he began to branch out into hammered metal and lightweight materials, such as foam intended for later rendering in ceramic. His hammered lead sculpture The Dreamer won a silver medal from the National Sculpture Society in 1970.

Through it all, Yolanda was by his side. She never wavered in her support and admiration for the artist and his beautiful work. Waylande Gregory died in 1971. Yolande lived for nearly ten more years, refusing to sell any of the pieces the prolific artist left behind. When she dies she left the estate to charity, with the proviso that any profits from the sale of his work would be earmarked to ensure that his legacy would live on through good works.

Waylande Gregory Studios was founded by Gregory’s great-grand nephew, Bryan Downey, and fashion entrepreneur Mickey Rosarin. The Studios create decorative porcelains and ceramics designed by Waylande Gregory, one of the leading modernist artists of the 20th century and the developer of revolutionary glazing techniques that were adapted by NASA to put a man on the moon. 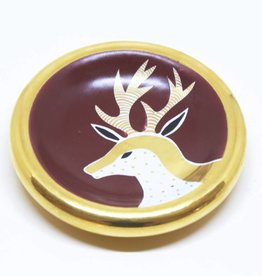